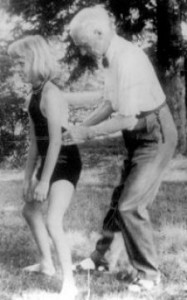 The Alexander technique was developed by the Australian actor F.M. Alexander. When doctors couldn’t find a solution for his voice problem, he started to look for a way to help himself.

By observing himself in the mirror while he was speaking, Alexander found out that his hoarseness and loss of voice was caused by what he did to himself as he was speaking. He found that he always fell into a certain pattern of unnecessary tension that went together with the idea of speaking. As he learned to inhibit, that is to stop that pattern from happening, his voice improved but so did also his health in general.

What he had been doing was pulling his head onto his neck and shortening and narrowing his back, and that had a harmful influence on all of his being. Alexander later found that this harmful pattern wasn’t only related to using the voice, but to all activity. He also found out that learning to inhibit this pattern and to encourage the opposite (allowing the head and neck to move freely in relation to each
other and the back to lengthen and widen) was an influence for good even where there hadn’t been any obvious health concerns.

You can read more about the AT on the websites of NeVLAT (Nederlandse Vereniging van Leraren van de AT) and STAT (Society of Teachers of the AT).

Another site with lots of information is: www.alexandertechnique.com